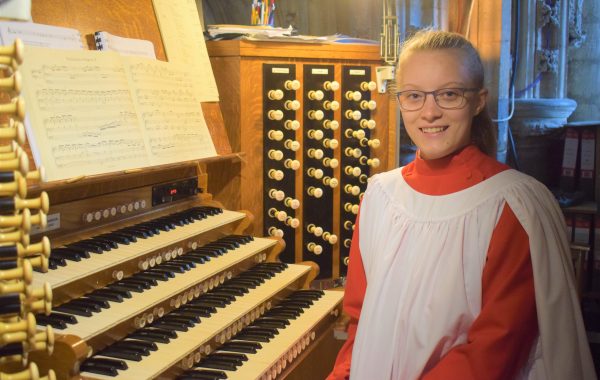 Miriam, who has been a student at King’s Ely since joining in Year 9 as a member of Ely Cathedral Girls’ Choir, scooped the Limpus Prize, Frederick Shinn Prize and Durrant Prize; awarded to the candidate who gained the highest marks in the practical examination.

Sarah MacDonald, Director of the girl choristers at Ely Cathedral, all of whom are students at King’s Ely, said: “We are all so proud of Miriam! She is naturally gifted, but she also puts in an incredible amount of hard work, doing upwards of three hours of organ and piano practise every day. The RCO diplomas really are the gold standard internationally and for someone to get one of those diplomas while still at school – and in what was their first ever organ exam – is very unusual indeed.”

Miriam, who was one of King’s Ely’s highest achieving GCSE students last year, was awarded the school’s Sixth Form Organ Scholarship in conjunction with Ely Cathedral, and she is currently studying Music, History and Religious Studies at A Level, whilst upholding all of her original commitments in the Cathedral Choir.

Miriam, whose home town is Bedford, hopes to study Music as an Organ Scholar at Cambridge or Oxford University, with the view to pursuing a career as a professional musician, either as an organist or director of music.

To discover more about opportunities at King’s Ely, including choristerships and scholarships, please visit: www.kingsely.org