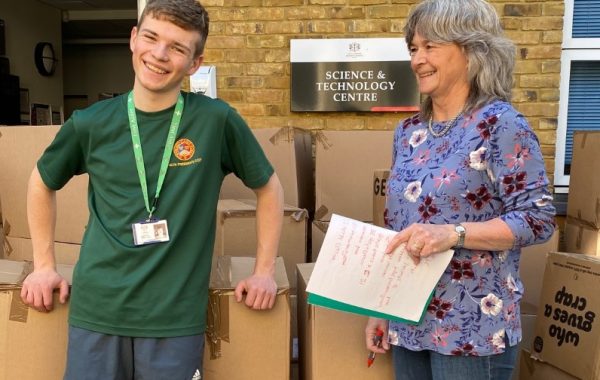 City of London Freemen’s were thrilled with the response from the community to the Ukraine Appeal which was organised by Sixth Form student Toby.

Collecting warm clothing, Toby began efforts after hearing that there was a particular need to support an appeal started by skiers from the Alps, who are at the Polish border helping coordinate assistance for those who are still inside the country. In the video below, Nils, one of the skiers who started the initiative, passes on his thanks to Toby, Mrs Meek and to everyone who has kindly contributed to the cause.

We have been overwhelmed with donations to Toby’s appeal, with one room in Philp House filled and spilling over into a second. The quality of the donations has been particularly striking; every garment is in superb condition and will most certainly help whoever receives it to keep very warm. We have been particularly touched by some children’s ski kit that has been donated: sadly, we suspect that this will be in particularly high demand as worried parents try to protect their children against the cold.

With freezing temperatures, loss of places to stay and potentially long sieges ahead, these items will be vital in helping to preserve life and to ameliorate suffering. Ukraine is in a dark and deadly valley, and we must do all we can to help and Make a Difference. Mrs. Meek and Toby have been aided hugely by many parents giving generously of their time to collect and organise the donations. Many thanks to Toby for initiating the appeal and thank you to everyone who has kindly contributed to this worthwhile cause.