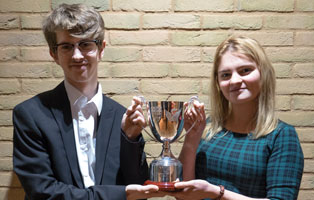 After a successful inaugural debating event held last year at Stamford School, the second Oswald Elliott Cup debate took place in November 2017, hosted by Fitzwilliam College, Cambridge and introduced by the Master of the College, Nicola Padfield. A team of Year 13 pupils from Stamford Endowed Schools, Daniel White and Daisy Jowers, retained the hotly contested Oswald Elliott Cup in their debate against a team of undergraduates from Fitzwilliam College. The motion was: ‘This House believes that free speech should never be restricted’.

The debate was preceded by a special lecture from Claire Fox, Head of the Institute for Ideas and a regular panellist on Radio 4’s The Moral Maze, on the importance of free speech and the right to be offensive. In a climate where young people are branded ‘the Snowflake Generation’ and universities are plagued by trigger warnings, safe spaces and no-platforming, Claire argued for open, vigorous debate, warning that safety does not encourage freedom or intellectual enquiry.

Karen Leetch, who runs debating at Stamford School, commented: ‘Our students were thrilled to be competing against Fitzwilliam College once again and we were very fortunate to be able to hear Claire Fox, a key voice in our national debate about free speech. We were especially pleased that the event gave so many of our students a very special insight into life at a Cambridge college.’