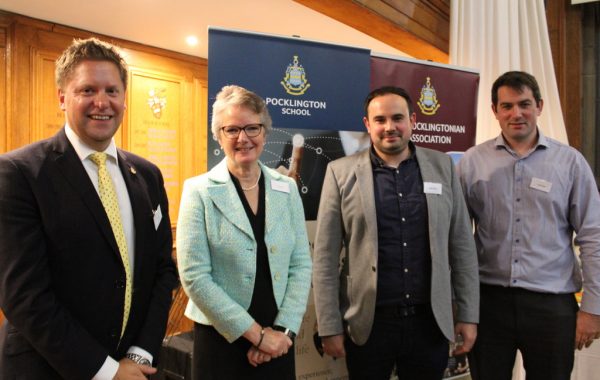 The Pocklington School Foundation Careers and Business Network held its latest event recently, with the focus for the evening on building a successful business and changing careers. The guest speakers for the evening were former pupils and brothers, Josh and Lewis Papa, who launched the award-winning Apex Mortgage and Protection UK Ltd, based in Pocklington, in 2019.

Apex specialises in providing income and life protection for military personnel and also offers a range of mortgage and protection products to individuals and businesses throughout the UK. The company has grown from 4 to 40 specialist advisors since its formation, has added a Wills and Trust Division as well as a Commercial Finance Brokering arm. It has recently won two UK Enterprise Awards.

Both Josh and Lewis studied at Leeds Beckett University after leaving Pocklington School in 2003, and both played rugby for Leeds Tykes Academy. Whilst both initially went into the financial services sector, at the age of 25 Lewis decided to have a change of career and joined the army, progressing to the elite 29 Commando Royal Artillery Regiment and earning the coveted Green Beret. He was deployed on tours across the world, including six months in Afghanistan in 2011. Whilst Lewis was in the army, Josh continued in financial services and began to make plans to create a business that they could both work in when Lewis was ready to return to civilian life, which resulted in the creation of Apex.

At the event, Pocklington School Headmaster Toby Seth hosted a Q&A session with Lewis and Josh to discover their career journeys and the skills they have developed and used to become Directors of a fast growing, ambitious business.

Toby commented: “Our Careers and Business Network events are always hugely popular, and it was great to see so many of our Sixth Form students in attendance. The Papa brothers have an inspirational story to tell, which includes not just success, but setbacks and challenges too. Their honest and candid answers showed how, through being resilient and committed, they have built a thriving business which they continue to develop and grow. They are both outstanding examples of the importance of family and how changing careers is not only commonplace nowadays but often absolutely the right thing to do!”

Josh Papa said: “We thoroughly enjoyed presenting to the pupils, teachers and Old Pocklingtonians, telling our story of how our business started and has been growing throughout the pandemic. The networking after was also a valuable source of making new contacts within the school network and fielding questions from the pupils was insightful and rewarding. It was great to be able to give back to the school which gave us so much.”

Sixth Form Business student Dylan, who attended the event, commented: “When you initially begin a business, the most essential things seem to be how many tasks you can take on, how much money you can make, and how to secure your next contract. But, until much later, most people are unaware of how many other factors are far more significant. I think that the best insight I gained from the talk was to understand that’s it’s okay to make a mistake, everyone makes errors. The best thing to do is to learn from it and accept it, this leads you to gain experience that can be massively useful later in your career, can save a lot of stress and allow you to move forward.”

A mix of current and former parents and students attended the event, which is one of three organised by the Network every year. Launched in 2017, the PSF Careers and Business Network is open to everyone in the wider Pocklington School community and it aims to help Pocklington School students, and each other, thrive in a highly competitive world. The Network has its own LinkedIn group, which has over 530 members across the world and is a valuable career networking pool for members to draw on.