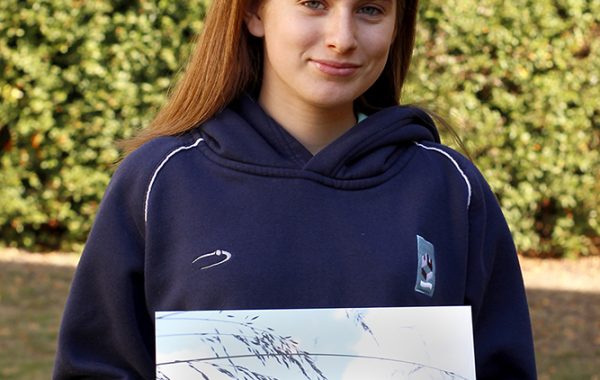 A PHOTOGRAPHY student at King’s Ely has snapped her way to victory in an annual competition.

Alice Edwards, who is in Year 11 at King’s Ely Senior, won the top prize in this year’s ‘Pauline’s Swamp Photography Competition’ with her striking and meaningful image, ‘Grass from the Ground’.

Antonio Longo, Head of Photography at King’s Ely Senior, said: “Alice has created a fantastic photograph which captures the essence of her rural surroundings. She should be very proud of her achievement. Alice has chosen ‘Street Photography’ as her GCSE Photography Sustained Project for her coursework, which she shows a real talent for people watching. Alice’s winning entry adds to the growing success story of the King’s Ely Photography Department, with winning entries from ILFORD PHOTO and Norwich University of Arts’ Beyond the Frame student competitions.”

Pauline’s Swamp is located in Burwell, near Cambridge. Parish records of the swamp date back to around 1805 and in 2007 the beauty spot was established as a resource for the parish. The swamp came into the possession of the Hawes family in 1992, latterly being looked after by Mr Paul Hawes, who kindly donated it in a ‘deed of trust’ to Burwell Parish Council in 2007 in memory of his wife. A photography competition is held each year to tie in with the swamp’s annual autumn activity and open day, which took place in September.

Alice’s success comes just months after King’s Ely Sixth Form student Luna Guo was crowned 2019 ILFORD PHOTO International Student Photographer of the Year. In April, Luna was announced as being ILFORD’s UK Student Photographer of the Year, but the talented 18-year-old went on to win the International prize with her stunning print, entitled ‘If you don’t help them who will?’.

It is the second year running that King’s Ely students have shone in the competition as Sixth Form student Orla Simpson was crowned last year’s UK winner.