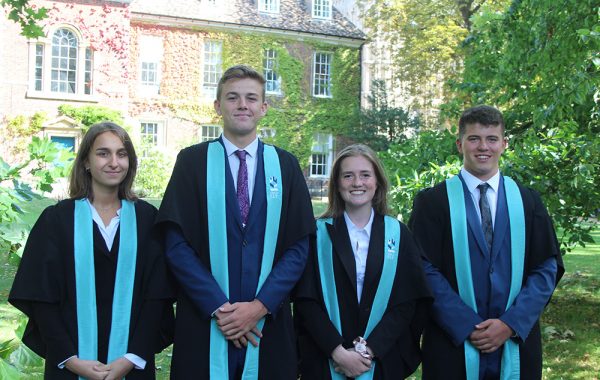 SOLOMON Boon and Charlotte Wilkinson have been formally installed as King’s Ely’s new Heads of School.

Hundreds of people gathered inside Ely Cathedral for the school’s Beginning of Year Service, which saw the incoming Heads of School being robed in their prefects’ gowns. The new Heads of School then robed the Deputy Heads of School, after which all then assisted in robing the other Prefects.

Charlotte has been a student at King’s Ely since joining King’s Ely Acremont Nursery in 2005. She is studying Biology, Chemistry and Maths for her A Levels and is heavily involved with the school’s Music department, where she plays the piano, clarinet and saxophone. Charlotte is a member of the school’s Jazz Band, Concert Band and Orchestra.

Speaking about her headship, Charlotte said: “I thing being Head of School is going to be a challenge but it is one I am really looking forward to. I am looking forward to getting to know everyone and having a say in things that are going on in school. King’s Ely has done so much for me and I want to make sure that everyone else gets the same experiences and as much as they can out of being here too.”

Sol, who has been at King’s Ely since joining King’s Ely Junior in Year 7, is studying Physics, Chemistry and Further Maths for his A Levels. Like Charlotte, he is very much an all-rounder, representing the school’s 1stteams in Rugby, Football and Cricket, as well as being a talented musician; Chapel Choir, Chamber Choir, King’s Barbers, Concert Band, Jazz Band and Brass Ensemble.

Speaking about his headship, Sol said: “I am looking forward to getting to know as many people, both students and staff, as I can throughout the year. I was very surprised when I found out I was going to be Head of School as there are many strong leaders in the prefect team and any one of them could have easily done very well as Head. I think the greatest challenge I will face over the next twelve months will be fitting everything in; good time management will be key to this.”

This year’s Deputy Heads of School are Tom Henderson and Ilaria Dimina.

The Beginning of Year Service also sees Heads of Houses for both King’s Ely Junior and King’s Ely Senior being welcomed into their posts.

Principal of King’s Ely, John Attwater, said: “It is wonderful that my first official function since joining King’s Ely has been to welcome our new school leaders, both Junior and Senior. Their appetite to take responsibility for their school and each other is great to see, and I look forward to working with them in the terms to come.”