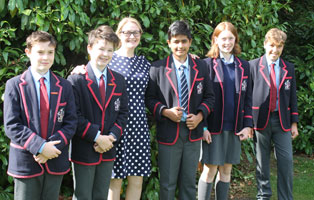 New Head at Swanbourne House, Mrs Jane Thorpe, has welcomed staff and pupils back to the School after the summer break.

The new Head at Swanbourne House School, Mrs Jane Thorpe, today welcomed pupils and their families to the School after the summer break.

Under Jane’s leadership, Swanbourne House aims to be an increasingly dynamic and forward thinking school offering an exemplary service in teaching and learning and the provision of an all-round education.

Deputy Head (Academic) Simone Mitchell said “We have already seen evidence of the enthusiasm and energy that Jane brings to Swanbourne House since her arrival during the summer break. Her plans for the School are ambitious and I have no doubt that under her leadership it will go from strength to strength.”

Jane joins the School with her family following an exceptional and diverse career. She read Law at Cambridge, and on graduation was awarded the Queen Mother’s Scholarship by the Middle Temple to study at the Inns of Court School of Law in London. Following a distinguished career as a Barrister, Jane became the youngest full-time District Judge in the country before making the transition into the world of education.

She has a keen interest in sports, having played cricket for Twickenham Ladies’, and she is now a Level 2 ECB Children’s Coach.  She was the school hockey captain, going on to play for Yorkshire, and she later played Blues’ Rugby at Cambridge.  Jane is looking forward to supporting all of the pupils in their sporting endeavours, and, particularly, to encouraging the further development of girls’ sports.

Jane is also a Trustee at Milton Keynes’ Youth Choir and loves attending a variety of music concerts.