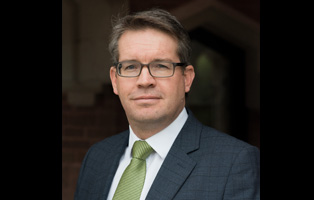 Bart graduated from the University of Natal in South Africa in 1994 after majoring in Economics and from the Rand Afrikaans University in Johannesburg in 1996 with Post Graduate Honours majoring in Organisational Change. Prior to joining Blundell’s, Bart taught at two leading schools – Michaelhouse in KwaZulu-Natal followed by nine years at Wellington College in Berkshire where he was a Housemaster and Head of Economics.

On his appointment Bart commented, “I am delighted to be given the opportunity to lead Blundell’s in the next stage of its history. The school is in excellent health, with numbers at an all-time high, with boarding flourishing and with exceptional academic success at Oxbridge level. It will be a privilege to build on the strong foundations that Nicola Huggett has set down. We are fortunate to have a dynamic and ambitious common room and I feel immensely proud to work with them to continue to help young people thrive in our beautiful Devon school”.

Blundell’s is a highly successful independent co-educational school for boarding and day pupils aged 11 to 18, founded in 1604. With the adjacent Preparatory School (for day pupils aged 2 to 11), it is located in 90 acres of beautiful Devon countryside in South West England, in a safe semi-rural area which can easily be reached by road, rail and air.

The school encourages a genuine love of study and scholarship, perseverance and intellectual inquisitiveness. Blundell’s takes pride in providing an all-round education in which pupils learn to be flexible, articulate and confident in themselves and in their abilities.Pupils successfully progress to a wide range of courses at the strongest universities, including Oxford and Cambridge.

Blundell’s is well known for its vibrant creative arts and has an excellent reputation for sport and for the spirit in which it is played. There is also a wide ranging programme of extra activities allowing pupils to explore interests outside the classroom and develop leadership skills.

Blundell’s School hosts an Open Morning in September as well as personal tours and taster days throughout the year. Please contact Mrs Tracy Frankpitt in the Admissions Office for further information on 01884 252543 / t.frankpitt@blundells.org