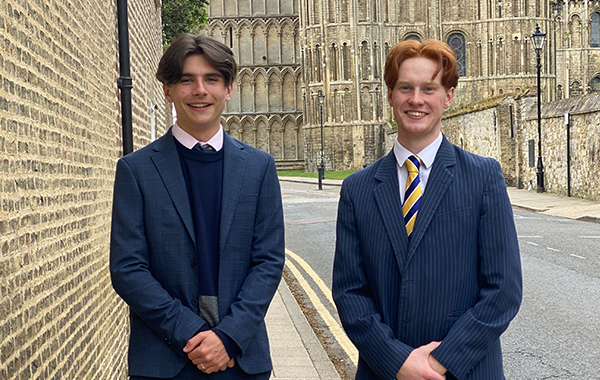 Billy Pinto, who is in Year 13, and Tom Bateman, who is in Year 11, auditioned back in January by submitting a recording of themselves performing a monologue. They were then asked to respond to some questions about themselves and why they wanted to be involved with NYT.

As part of the second round of auditions, Tom and Billy were invited to join a ‘Zoom’ call with an NYT Ambassador, in which they performed their monologue again in various different ways, as well as answering more questions about themselves and their love of performing.

Billy and Tom, who are both heavily involved in Performing Arts at King’s Ely, have now been invited to take part in NYT’s starter courses later this year, where they will get to meet other NYT actors, participate in workshops and potentially feature in NYT shows that are staged each year.

Tom said: “This is a small step closer to me one day hopefully achieving my dream of becoming an actor. I enjoy working with others and channelling myself into a different character in a kind of escape when taking part in Performing Arts. I think NYT will be a fantastic opportunity.”

Billy added: “I am very excited! I know people who have been part of NYT and they say it was the best experience of their life, and that it was massively rewarding.”

The NYT is a world leading youth arts organisation established in 1956. Since its launch, it has nurtured the talent of hundreds of thousands of young people.

Nick Huntington, Director of Drama and Theatre at King’s Ely, said: “Billy and Tom have worked very hard preparing audition pieces at the same time as undergoing an enormous number of academic tests and extra-curricular rehearsals. All credit to them for their energy and resilience – they both thoroughly deserve this incredible opportunity.”

The Arts offering at King’s Ely is enviable. Music, Drama, Dance, Fine Art, Textiles, Sculpture and Photography are each embedded in the culture of the school, with vast opportunities for pupils of all aspirations.