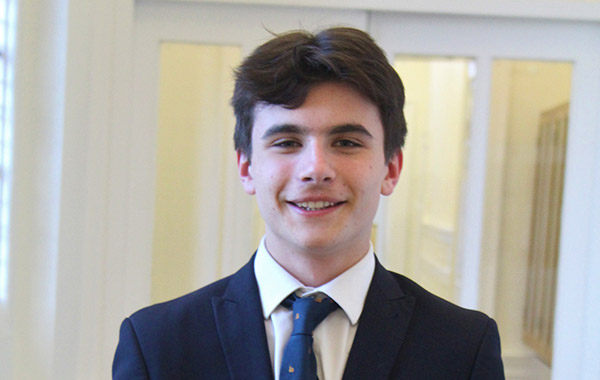 Billy, 16, will be starring in (subject to the COVID-19 situation) ‘Imagination’, by Timothy Knapman and Stuart Matthew Price. Directed by Richard Fitch, the production will be presented at CURVE Theatre, Leicester and for the International Youth Arts Festival, Kingston in June and July.

As a member of the NYMT 2020 Company, Billy will also be invited to participate in other events and performances, including the ever-popular NYMT Christmas Concert at St John’s, Smith Square.

Billy, who is from Ely, has been a student at King’s Ely since 2006, when he joined King’s Ely Acremont Nursery. He first got a taste of musical theatre in Year 7.

Billy said: “I first started getting involved in theatre and musical theatre in Year 7 at King’s Ely Junior when, firstly, I was involved in the school’s production of ‘Richard III’ for the Shakespeare Schools’ Festival and then in ‘High School Musical’, which was my first musical and when I discovered I liked singing. I enjoy the team spirit shared with the other cast members involved in a production and being able to convey a different character from myself, or any other character I have played before.”

To say that Billy is a familiar face in productions at King’s Ely would be a slight understatement. His roles to date have included Mr. Hopkins in ‘Made in Dagenham’, Oliver in ‘Oliver’, Doody in ‘Grease’ and Arkin in ‘Ugly Youth’, which was an original production written by Nick Huntington, Director of Drama and Theatre at King’s Ely, and which earned a five star review at the Edinburgh Fringe Festival last summer.

When asked what he had to do to be selected for the NYMT, Billy, who is studying Drama, History and French at A Level, said: “There were two rounds of auditions. Auditions are held all over the country and I attended one in Cambridge. We were asked to prepare a musical theatre song to perform at the audition and we had to participate in a dance and an acting session. Then there were call-backs specifically for the productions being put on this year and I was called back for two of these. We were given scenes and songs to prepare for the call-backs which were in London. I feel so excited and privileged to have been selected! I didn’t expect it at all as it was my first year of auditioning and I’ve heard that often people audition four or five times before they are cast in a production.”

Billy added: “NYMT was the first time I have done any drama or theatre outside of school. That’s partly why I’m so pleased to have been given a role! I really enjoy drama at King’s Ely. The teachers in the drama department are brilliant and so are the other pupils, so it feels like we are a real team. Every King’s Company show is produced to such a high level, which feels very professional. If I can get good enough A Level grades, I would really like to go to university in Edinburgh before going on to Drama School and then I want to become a stage actor.”

To find out more about drama and other opportunities at King’s Ely, please visit www.kingsely.org