Music in Full Swing at Dauntsey’s 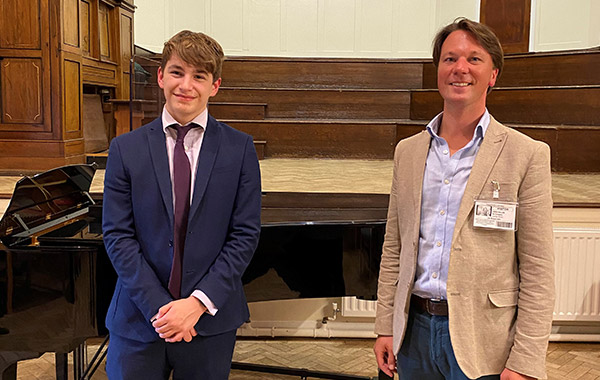 Pupils from Dauntsey’s have recently competed in two of the School’s toughest music competitions. Fourth and Fifth Form pupils took to the floor to take part in this year’s Middle School Music Competition. Each produced outstanding performances, but Ben’s playing of Nocturne in G minor by Fryderyk Chopin and Mambo by Christopher Norton gave him first prize.

This year’s competition adjudicator was the renowned clarinettist and saxophonist, Tim Redpath, who judged each performance remotely using video.

Further up the School, congratulations go to Tom, who won this year’s Gilliat Singing Competition, adjudicated by choral specialist Greg Hallam. Tom performed Se Vuol Ballare from Mozart’s Marriage of Figaro, followed by Vaughan Williams’ The Vagabond from his Songs of Travel. In the Mozart aria, Tom communicated the outrage of Figaro at the discovery of the Count’s scheming plot and then the determination to unravel the plan and outwit him. In Williams’ piece, Tom communicated the changing weather and affect of time, as a traveler engages on a rough journey through the English countryside in the early 1900s.

“Performance is such an important part of learning an instrument. We have been unable to hold live concerts so there was a wonderful sense of enjoyment evident in all the individual performances.

“These school competitions allow our pupils to take to the stage, share their love of music and experience the challenge of performing in front of leading musicians. All competitors produced outstanding performances, making the selection of winners all the harder.

“We are enormously grateful to our two adjudicators for judging each competition with great skill and offering excellent encouragement and advice to all those who took part.”