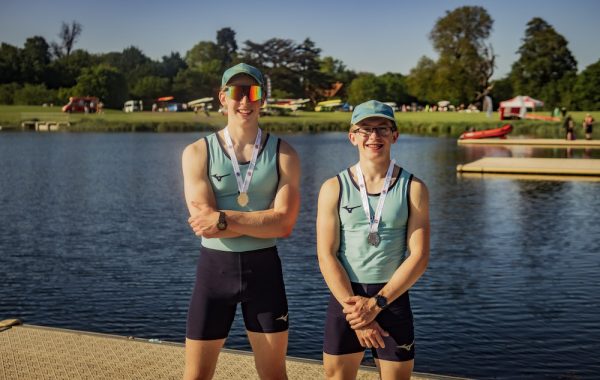 Sixth Form students Will Buckingham and Conall Comley, who are both dedicated members of King’s Ely Boat Club, won a Bronze medal at the fiercely contested British Rowing Junior Championships.

Conall and Will produced a stunning performance in the J18 Boys Double race, in gruelling heat, to secure the Bronze in what was a very competitive national category. The Championships took place at Holme Pierrepont National Watersports Centre in Nottingham.

This success came just a couple of weeks after they won a Silver medal at the National Schools’ Regatta at Eton Dorney, where they placed second in the J18 Boys Double race. Holly Burke and Mia Gray also made the finals of the competition after placing 12th out of 30.

Craig Ward, Head of Rowing at King’s Ely, said: “The British Rowing Junior Championships saw King’s Ely wrap up a successful season, despite all the challenges that Covid has presented. Conall and Will have worked incredibly hard this season and have been rewarded with medals at both the National Schools and British Junior Championships regattas, respectively. This is the first time in nine years that a King’s Ely crew has achieved such a feat, so we are understandably very proud of their success.”

With arguably the best stretch of river for rowing in the country, it is not surprising that King’s Ely has been a strong force in UK rowing for many years. As one of the major sports available to students from Year 8 upwards, rowing is enormously popular at the school. The King’s Ely Boat Club is located on the River Great Ouse, which provides an uninterrupted stretch of water for over 15 miles in each direction, including a 5 kilometre straight, making it the perfect place to train.

To find out more about rowing and other opportunities at King’s Ely, please visit www.kingsely.org