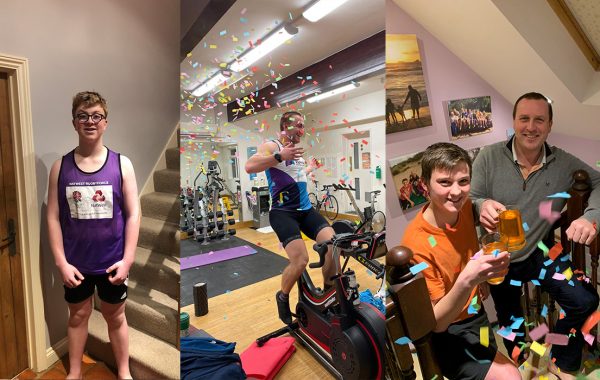 A CHALLENGE to climb the height of Mount Everest by completing multiple ascents of the steps in their own homes has resulted in King’s Ely students raising £11,000 for charity.

Pupils in Osmond House and Wilkinson House at King’s Ely Senior came up with the idea of the ‘King’s Ely Mount Everest Challenge’ for several reasons – to do something meaningful in memory of Captain Sir Tom Moore, to boost morale during ‘Lockdown 3′, and to raise as much money as they could for the charity, PAPYRUS Prevention of Young Suicide. PAPYRUS is the UK charity for the prevention of young suicide (under 35’s).

Participating either as individuals or as part of tutor group teams, the boys’ challenge was to climb the height of Mount Everest – 8,849 metres – by completing multiple ascents of the steps in their own homes.

Year 11 ‘Osman’, Ed Spencer, and King’s Ely’s Graduate Rowing Coach, James Foster, were the first to complete the challenge. Ed conquered it in just five days and covered the 8,849-metre distance by climbing 2,496 flights of his stairs at his home in Burwell. Mr Foster decided to complete the distance on a static exercise bike – it took him 10 hours and 48 minutes of non-stop cycling.

Osmond House has had 23 individual summits and another 33 students participated as part of their tutor group. Together, Osmond House and Wilkinson House have raised £11,000 for PAPYRUS.

Paul Lott, Housemaster of Osmond, said: “This is a fantastic sum which will support the PAPYRUS Helpline, and also with education about preventing young suicide. Moreover, this represents a monumental achievement of effort, dedication and self-discipline at a time in which so many young people are struggling with their mental health. These are qualities that will help those who participated in their lives ahead when they inevitably face their next ‘Everest’, whatever that may be. To all those who encouraged, donated, cheered on and motivated the boys on the tough days, when they just felt like giving up – thank you very much.”

There is still time to support the boys – to do so, visit: www.justgiving.com/team/OsmondEverestCimbers