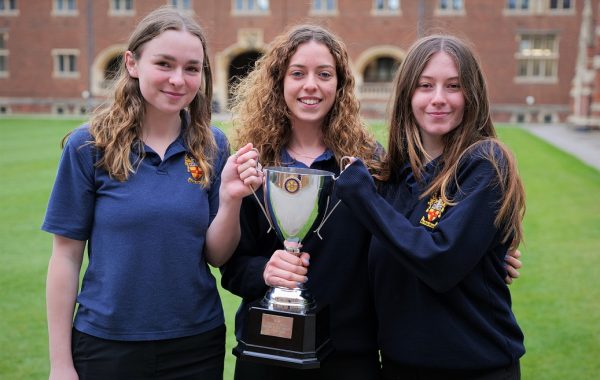 On Saturday 23 April, a team of Sixth Form pupils from The Leys School, Cambridge were named regional winners of this year’s ‘Youth Speaks’, the Rotary Club Youth Public Speaking competition.

The winning team comprised of Ellie M, Sienna H and Georgia D who are currently studying for their A Levels. The girls were required to deliver a 15-minute presentation on why the institution of marriage is outdated, competing against strong teams from St Albans’ Girls School and Stamford High School.

The girls’ victory follows their success in the district finals, which was held earlier, against teams from St Joseph’s College, Ipswich and The Perse.

The competition has been run by the Rotary Club since 1988 and provides the opportunity for teams to build their confidence and ambition.

Miss Garrett, Head of English at The Leys, commented: “We are so proud of the team, who retained the same winning formula of eloquence, humour and teamwork as they have done throughout the competition.

“They saved their best performance for the final and the way they worked with one another in answering questions was a remarkable feat of collaboration. The other teams were by far the strongest we had faced, and I think we were all aware that getting this far in the competition was a remarkable achievement in itself. Nevertheless, when The Leys were announced victorious, our team and the parents supporting them were absolutely thrilled.

“It is a shame that the national finals have been cancelled, as the next round would have been held at the NEC in Birmingham which would have been a wonderful experience for them, but the team will now remain unbeaten and should be incredibly proud of their achievements.”