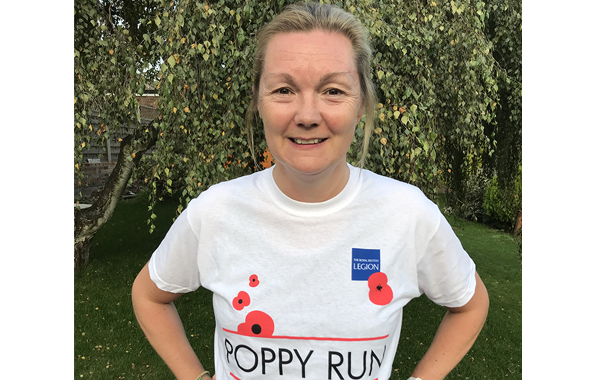 A TEACHER at King’s Ely is putting her best foot forward to raise funds for a charity close to her heart.

Helen Melville, a Geography Teacher at King’s Ely Senior, is challenging herself to run 100 miles throughout November to not only put her stamina to the test but also raise as much money as she can for the Royal British Legion, a charity that provides financial, social and emotional support to members and veterans of the British Armed Forces, their families and dependants.

Helen, who lives in Downham Market, Norfolk, said: “In what has been a very challenging year, all our hugely valuable charities have suffered through the lack of large events and fundraising opportunities. I’m taking part in the Poppy Run this November to contribute to the Royal British Legion’s fundraising as I can’t be out collecting for poppies as I normally would be.

“I’ve challenged myself to run 100 miles over November. Obviously, this is a minimum of three miles a day plus a bit more, which is quite a step up from the five to eight miles a week I usually run.

“The Poppy Appeal was founded to help those in need following a national crisis. Right now, the Royal British Legion is helping those who are isolated from family, facing homelessness, struggling to feed their children or who are in financial crisis. They are working tirelessly to ensure that those who have served are being looked after no matter what challenges they and the country faces.

“Your donation will mean they can continue to provide the life-changing support that our Armed Forces community needs and deserves. If you can donate in support, it would be very much appreciated.”

For more information about Helen’s challenge, or to donate, visit: www.mypoppyrun.britishlegion.org.uk/fundraising/MyPoppyRun2020-HelenMelville