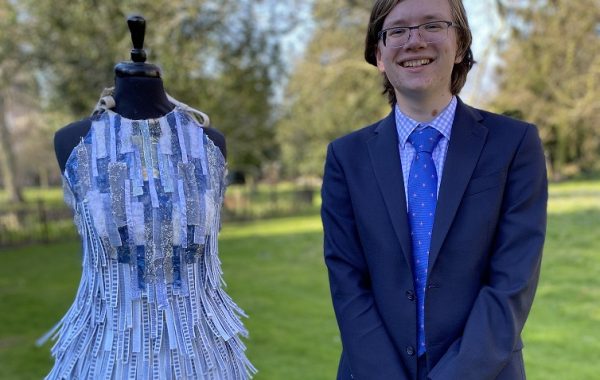 A TALENTED young designer at King’s Ely is celebrating victory in a prestigious competition.

John-Oswald Crichton, 17, was one of eight Fashion and Textile Design students at King’s Ely to be shortlisted in the national Stitch Festival Dressmaking Competition, which was held as part of the Stitch Festival at London’s Business Design Centre from March 3rd-6th.

John-Oswald, who is in Year 13 at King’s Ely Sixth Form, was voted the winner of the ‘Eveningwear Teenage’ category of the competition with his stunning garment, pictured. The judging panel was made up of four dressmaking and textile experts – Esme Young, Lisa Comfort, Nerrisa Pratt and Mark Francis. John-Oswald’s dress was modelled on the catwalk at the festival by Thea Allinson, who is also in Year 13 at King’s Ely.

John-Oswald joined King’s Ely Junior in Year 6. He is studying Textile Design, Mathematics and Biology for his A Levels, and he hopes to study Fashion Design at the University of Leeds.

Speaking about his win, John-Oswald said: “I am delighted to have won, especially in a category which had so many strong entries! It was such a fulfilling experience to see my garment on the catwalk. It was great to see it move on the human form, as well as seeing the reactions from the crowds. I don’t think I will ever forget the experience!”

John-Oswald was shortlisted alongside Maria Jago De La Cuerda, Emilia Decker, Kitty Carr-Lake, Disa Hellyer, Elanda Cundy, Chloe Skoulding, and Meghana Gurung. Each student had to provide information about the garment they had produced, including the use of both creative and technical processes. All the designers’ shortlisted garments were on display at King’s Ely’s stand at the festival, alongside lots of other striking pieces made by pupils.

John-Oswald was also proud to exhibit his winning piece – and another garment he made – at the ‘For Worship and Glory II Exhibition’ at Ely Cathedral. The Royal School of Needlework (RSN) exhibition opened in January, and King’s Ely’s GCSE and A Level Textile Design students were invited to showcase their work alongside RSN designers.

John-Oswald said: “Being a part of exhibitions like this is a really rewarding experience. It is so inspiring to have your designs alongside the work of highly skilled artists and experts from many different fields of design. The possibilities when it comes to textile design are endless. One day you can be doing sketches, then the next day you can be doing embroidery. There are so many ideas to explore. The Art Department at King’s is literally amazing – our creativity is challenged and nurtured every day.”

Like John-Oswald, Kitty Carr-Lake, who is also in Year 13, was thrilled to showcase her work at both the Stitch Festival and the ‘For Worship and Glory II Exhibition’.

Kitty, who is from the Lincoln area, joined King’s Ely Sixth Form in 2020 and is studying Textile Design, Product Design and Business Studies for her A Levels. She said: “Part of Textile Design is about telling a story and conveying messages which can sometimes leave a profound impression to the people viewing your pieces. I love the idea of this, so I always try to think outside the box and connect to the viewers by telling a story through my work. I love trying to break the limits I never thought were possible!” 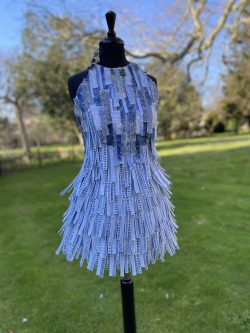