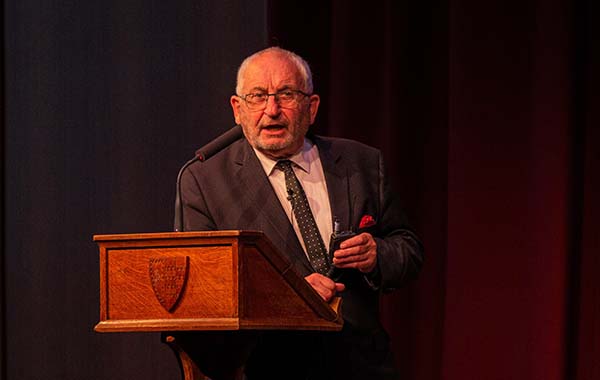 Dauntsey’s has recently welcomed John Bird MBE to the School for its second Mercers’ Lecture of term. John, along with Gordon Roddick of The Body Shop, launched The Big Issue in 1991, to campaign on behalf of homeless and socially excluded people.

John presented his lecture to pupils, staff, parents and members of the local community.

During the talk, he skilfully blended anecdotes and jokes with some tough words about homelessness and climate change, an issue close to his heart. As a member of the House of Lords, John is working on The Wellbeing of Future Generations Bill, which aims to ensure young people are considered in decisions relating to issues such as climate change and homelessness.

John outlined his life story and how it led him to where he is today: the co-founder of The Big Issue, a father, and an avid supporter of all things anti-racist and other wrongs in the world. He emphasised that, although his start in life had not been ideal, what matters is what he did with that past and his situation, turning it into a force for good.

Prior to the lecture, a group of Dauntsey’s Sixth Form pupils had the opportunity to have dinner with John. Izzy, one of the Sixth Formers said:

“During supper, John was especially interested in our questions and opinions. He answered each question thoroughly and eloquently and then posed a question back to us. He is a great believer in learning from the younger generation, pointing out that, as future leaders, it’s important for our voices to be heard.

“John showed us a new perspective on the world and I am grateful that we had the opportunity to listen to him and think about how we can follow his example and bring about real and lasting change. I will look back on it for many years to come, what he said started a really important conversation.”

The Mercers’ Lectures are named in recognition of the links between Dauntsey’s and the Mercers’ Company, which go back to Mercer founder Alderman William Dauntesey, Master of the Worshipful Company of Mercers, who founded the School in West Lavington in 1542.

All lectures commence at 7.30pm and will be held in the Memorial Hall. Everyone is welcome to the Lectures and entry is free but tickets must be reserved.

Please note that bookings for lectures will open approximately one month before the date of each lecture.

Please reserve your seats online: www.dauntseys.org or by contacting the School on 01380 814500.