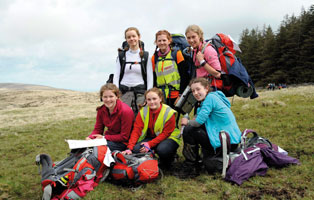 A team of six Headington School girls reached the culmination of months of intense training by completing the gruelling Ten Tors navigation contest. Headington’s team of Lucy, Emily, Alexia, Sophie, Ellie and Caitlin has spent months in preparation, travelling to Dartmoor in February, stomping around the Chilterns in March, and endlessly route planning and re-route planning. At 7.00 am on 12 May the starting guns fired and nearly 2,500 participants streamed their separate ways across Dartmoor. The challenge was to complete 35 miles over the boggy featureless moors, navigating their way around Ten Tors. Nervous team managers could be seen checking the progress of the teams constantly throughout the day. At 7.00 pm the Headington girls had successfully achieved their aim of setting up camp two-thirds of the way around the moor. Up again at 5.00 am, the team pushed on and finally crossed the finishing line at exactly midday – 17 hours after starting and the fourth all-girls team to cross the line. As part of the preparation for the gruelling event, three of the girls, Alexia, Sophie and Caitlin, took part in the Tour de Trigs ‘taster hike’ last December – the small matter of a 15-mile walk in five hours and three minutes. The three girls, who called themselves the Cheese and Onion Walkers, came first in their group in the challenging cross-country navigation exercise. The walkers are all either working on the Duke of Edinburgh Award scheme or part of Headington’s CCF (Combined Cadet Force) contingent, with some of the girls involved in both schemes.