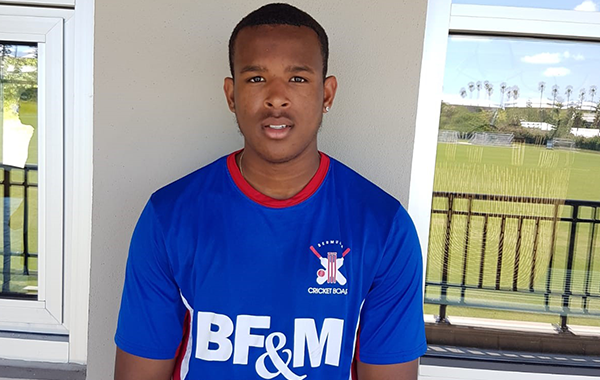 Jabari Darrell, a former boarding student at De Aston School in Market Rasen, Lincolnshire, has been called up to the Bermuda Men’s Cricket Squad.

Jabari, who has represented Bermuda Under 19s previously, earned his first senior selection when a training squad was announced by the Bermudan Cricket Board on February 12th 2020.

After arriving at De Aston School in 2016 to study for his GCSEs, Jabari wasted no time integrating into the local cricketing community. A string of impressive performances for the school team, and Market Rasen Cricket Club’s first eleven, were followed by a call up to Bermuda Under 19s in 2017 at the age of just 15.

After taking wickets and scoring runs during Under 19 World Cup qualifiers in the summer of 2017, playing alongside current De Aston boarders Tai Cariah and Sancho Jackson, Jabari returned to De Aston to complete his GCSEs while continuing to excel at cricket.

During his second year in England he remained a key part of the Market Rasen team, while also joining Scunthorpe Cricket Club and representing the county of Lincolnshire. His continued form saw him snapped up Leicestershire County Cricket Club, where he went on to represent their development side.

“We are all very proud of Jabari here at the De Aston Boarding House. He was remarkably successful at De Aston, both academically and in terms of cricket, so it’s fantastic to see his cricket career blossoming.

“The work of De Aston School, and the local teams he represented while studying here, has been absolutely instrumental in getting him to where he wants to be and we wish him every success for the future.”

To enquire about Boarding at De Aston please call 01673 840822 or email at boarding@de-aston.lincs.sch.uk.