Drama Thrives at Dauntsey’s Through Pandemic 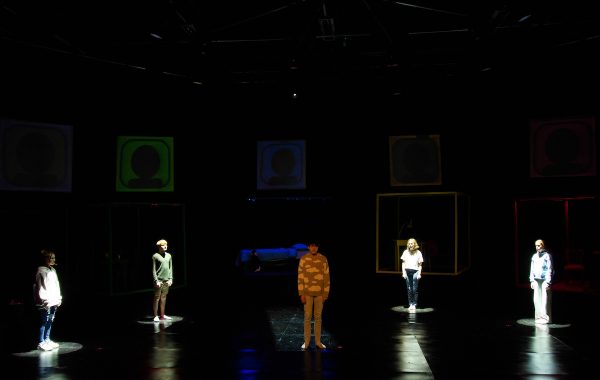 Drama at Dauntsey’s has continued to thrive, in spite of the restrictions imposed by the Covid 19 pandemic. The School’s Drama department has found creative ways of continuing to involve pupils in Drama, whether they are at home due to lockdown, or in school with social distancing measures in place.

Last term, when pupils and staff were in school, Dauntsey’s staged its first socially distanced drama production,Chatroom, a play by Enda Walsh. A powerful depiction of modern-day isolation and the power of technology, the plot depicts five young people who meet on the internet and encourage each other’s bad behaviour. The cast required was small, enabling social distancing on-stage, while a team of pupils from Second Form through to the Upper Sixth were responsible for stage design, lighting and sound.

Casting two ‘bubbles’ meant that pupils had to be socially distanced at all times, while the audience configuration had to ensure seating was ‘bubbled’ by year group and by House. In spite of several rehearsals being conducted via Microsoft Teams, the end result saw the cast cultivate relatable and three-dimensional characters, each of them learning a large number of lines in a short timescale.

Following this success, the Drama Department has released its first binaural audio performance entitled The Crossing. Binaural is a method of recording sound that uses two microphones, arranged to create a three-dimensional stereo sound sensation of actually being in the room with the performers. The production was devised and produced by twenty Sixth Formers, in response to a true story about human trafficking. The Crossing was created before Christmas, adhering to social distancing guidelines.

As a means of extending its drama offering, Dauntsey’s has launched LAMDA (London Academy of Music and Dramatic Arts) and more than 40 pupils have opted for on-line lessons with first examinations scheduled for the Summer.

Meanwhile, the School continues to deliver its A level and GCSE courses online and finds creative ways to approach practical work, including on-line improvisations and creative film editing at home.

“The performing arts are part of the fabric of life at Dauntsey’s and we have all missed being able to run our usual programme of creating and performing Drama through the pandemic. Pupils and staff have been committed to delivering performances, in spite of the many obstacles we face and I am immensely proud of the two productions we have pulled together under very difficult circumstances.

“We can’t wait to get back to something like normality but, in the meantime, we are working hard to ensure pupils can continue to enjoy the creativity and stimulation of drama, albeit from their own homes.”

Chris recommends the following resources to get your drama fix:

Some schools and drama clubs subscribe to https://www.dramaonlinelibrary.com which hosts an incredibly comprehensive range of drama productions.