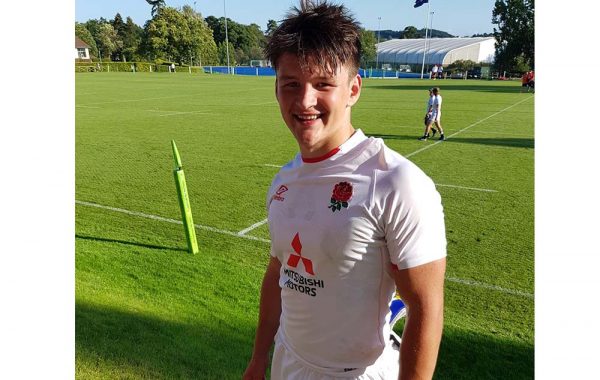 Vice-Captain of School, Charlie, started his rugby journey at just 4½ years old as a micro at Ashby Rugby club. Once Charlie moved into contact rugby he became known as “The Tank”.  At 13, Charlie was delighted to win a place in the Leicester Tiger’s junior academy pathway training at Nottingham University Sports Centre.  After moving to Denstone College he was selected for Leicester Tiger’s Academy rugby at age 16  and started his training as a hooker. He was registered as an England Academy player, was invited to the England U18 camp at Loughborough University, and was then selected to play Italy where he won his first U18 cap this summer.

Charlies dad says ‘’He works tirelessly on his stamina, strength, and skills, and studies the game and nutrition in detail, especially as he moved from centre to hooker. Charlie is candid with himself but at the same time has great fun playing. While he studies the background and “the why” behind everything he’s asked to do, he then seeks out and soaks up good advice. Charlie is now looking forward to playing some great rugby for Denstone College and Tiger’s Academy in the season ahead’’.

Charlie’s quote is “An experience that’s still sinking in; and a goal that I’ve imagined since I was 14 years old.”

Denstone College are very proud of his achievement and wish him every success with his rugby and academic studies.