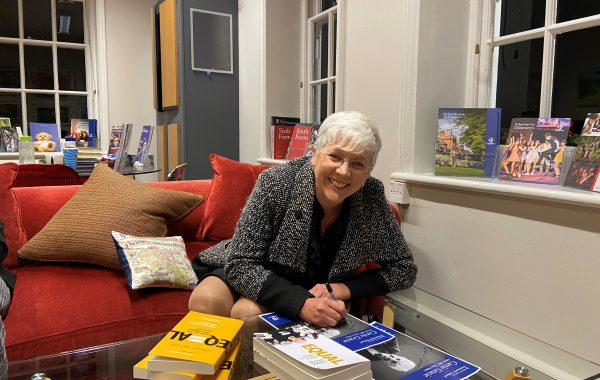 Dauntsey’s has recently welcomed Carrie Grace, former China Editor for the BBC, to the School for its third Mercers’ Lecture of term. Carrie was appointed BBC News’ first editor for China based in Beijing in 2013. She resigned from this role in 2017 in protest at unequal pay by the BBC. She has since spoken widely about both China and gender equality. She left the BBC in 2020 after a career spanning 33 years.

Carrie delivered a wide cultural and political perspective in her lecture; she spoke of her career in journalism and her role in deconstructing the Western audience’s misconceptions of China. A central theme of her talk was the importance of the values of creativity and honesty. Her values became a ‘guide-rope’ for the choices she made throughout her career.

During her lecture, Carrie focused on her personal experiences in China and the implications of politics on people’s lives. Her description of White Horse Village in Sichuan, China, and the repercussions of urbanisation and climate issues on an agricultural population, illustrated the reality of a changing China.

Carrie explored her values closer to home when she spoke about her fight for Equal Pay at the BBC. She recounted her struggle with the Corporation, and her decision to donate the back pay she finally received, to the gender equality charity, the Fawcett Society.

Prior to the lecture, a group of Sixth Formers had the opportunity to meet Carrie informally over dinner. During this discussion, Carrie demonstrated her ability to engage with any question and concisely break down her perspective on each topic raised by the students.

Noah, one of the Sixth Formers who attended the dinner and lecture, said:

“Carrie was an inspiring speaker. I think what we can learn from her is the importance of following our values and the role they can play in pursuing both personal and work-related goals in life.

“Whether it was Chinese politics or Equal Pay Rights, Carrie’s values were always her ‘guide-rope’, and these have been pivotal in her career. Her resolve and subsequent actions have not only opened our eyes to China but have also brought about a renewed drive for women’s rights in the workplace.”

The Mercers’ Lectures are named in recognition of the links between Dauntsey’s and the Mercers’ Company, which go back to Mercer founder Alderman William Dauntesey, Master of the Worshipful Company of Mercers, who founded the School in West Lavington in 1542.

All lectures commence at 7.30pm and will be held in the Memorial Hall. Everyone is welcome to the Lectures and entry is free but tickets must be reserved. Please note that bookings for lectures will open approximately one month before the date of each lecture.