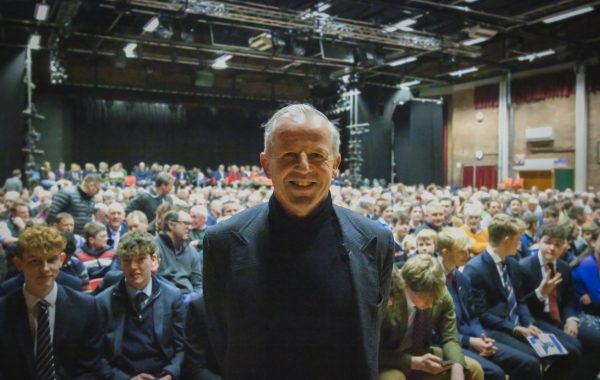 Dauntsey’s has welcomed All Blacks rugby legend Sean Fitzpatrick to the school, in the second of this term’s Mercers’ Lectures.

The former New Zealand All Blacks legend gave a captivating talk about his rugby career, highlighting his inner drive, his mentality and the importance of family to his success. Sean is widely regarded as one of the finest New Zealand players, having played in 92 internationals, 51 of those as Captain. Sean regaled the audience with many stories about his playing days as well as his time as Captain, in particular leading New Zealand to a series win over the British Lions in 1993.

Sean retired from rugby in 1997 and, since then, has become a respected and renowned rugby analyst for both TV and newspapers and has assumed roles on the boards of both Harlequins and The Scarlets, as well as becoming a Rugby Consultant to the New Zealand Rugby Football Union, responsible for player development and liaison.

Sean left the audience at Dauntsey’s with some powerful messages, including “remember your losses more than your wins, to ensure you never feel that way again”, “re-focus on what you do best – long roads can turn out to be the right roads” and finally “winning matters – be the best you can be”.

Will, one of the students who attended the lecture, and took part in an informal supper with Sean beforehand, said;

“It was a privilege to meet Sean. He is arguably one of the best hookers who has graced the game and has played alongside, and captained, some of the most renowned players the game has seen.

“His lecture was relevant, humorous and enjoyable and the audience left feeling inspired to enjoy life, to focus on being the best they can be and value the importance of family – all of which contribute to being successful in life, whatever your goals might be.”