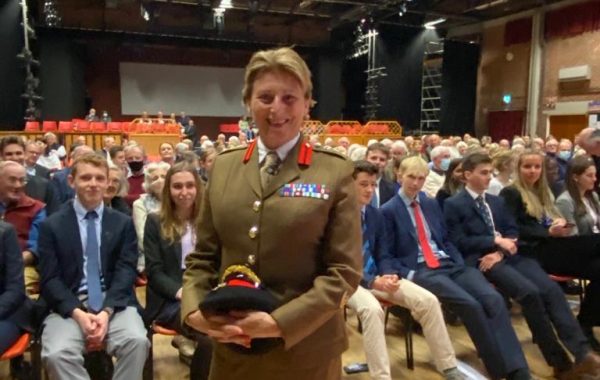 In the final event of this season’s Mercers’ Lectures, Dauntsey’s welcomed Colonel Lucy Giles to the School. Colonel Giles has been a trail blazer for women in the British Army, having influenced female participation in the Armed Forces for three decades. She was the first female College Commander at the Royal Military Academy, Sandhurst, and worked as the President of the Army Officer Selection Board, overseeing the assessment of the Army’s next generation of leaders.

Colonel Giles has used her progress and positions to inspire many women and received the Inspirational Award at the inaugural Women in Defence Awards and the Woman of the Year 2016 award. She was in the Times 500 People of Influence 2016 and is an ambassador for First Women UK.

During a pre-lecture dinner, a group of Sixth Formers spoke with Colonel Giles about her experiences in the Army and listened to her insightful commentary on the importance of diversity and inclusivity in the Armed Forces. They asked questions about the qualities to be found in an effective leader as well as the changes the Ministry of Defence needs to make, highlighting the strengths of diversity in such an institution.

During her lecture, Colonel Giles gave an honest account of her experiences while serving as an officer in the Royal Logistics Corps, through to her current position in the Defence Academy and how this 30-year career shaped her as a person.

George, one of the students who attended the lecture, said:
“While explaining the influence a military career can have on your personal and professional life, Colonel Giles also stressed the importance of authenticity and not changing to fit a persona that you think people want to see.

“The audience was fascinated by her explanations of the Army’s framework for leadership, as well as the skills required to be a valuable leader. Everyone was impressed by the personal sacrifices and dedication she and her family have made due to an array of operational deployments.

“Colonel Giles gave us a fascinating talk and undoubtedly inspired many members of the audience. We thank her very much for visiting Dauntsey’s.”