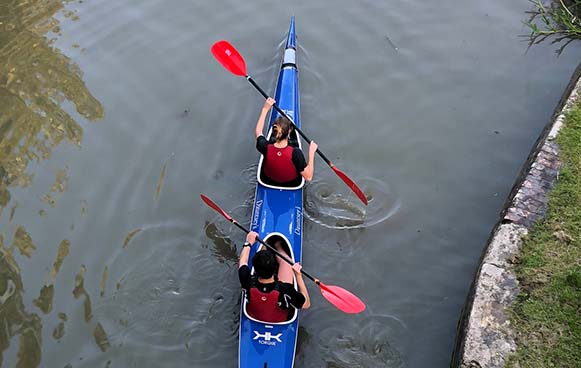 Dauntsey’s has been trialling Lower Sixth Formers for the teams who will enter the 2022 Devizes to Westminster “DW” infamous canoe race, known as ‘The Canoeist’s Everest’. The race involves paddling the 125 miles between Devizes to Westminster in three and a half days over the Easter weekend – the equivalent of more than a marathon a day. Dauntsey’shas been entering teams in the DW for more than 40 years.

Each pair of students practices paddling the lightweight and unstable canoes and then takes part in trials to secure a coveted place in Dauntsey’s DW team for the race. The Dauntsey’s team will consist of seven boats, including the fastest female crew, fastest male crew, fastest mixed crew, next three fastest crews, and a wildcard crew chosen by the coaches.

Dauntsey’s crew will paddle in aid of the mental health charity, MIND, the School’s chosen charity for this year.

“Unlike some schools who only select the fastest paddlers, Dauntsey’s selects team members after trials in the first half of the autumn term and full training begins in earnest in the Spring Term. This intensive training programme is made up of three water-based sessions a week, in all weathers, which quickly brings the paddlers up to a good standard.

It’s not all about winning. Dauntsey’s ‘have a go’ attitude doesn’t lessen the arduous nature of what crews achieve and we do have plenty of top 10 finishes in all categories. However, the focus of the race for the School is to develop students and help them get the best out of themselves.”