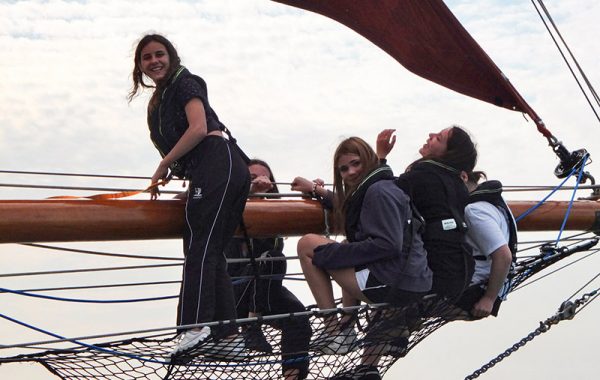 The Fourth Form at Dauntsey’s have recently completed their first adventure on Jolie Brise, the Tall Ship owned, maintained and sailed by the pupils. The trip provides an introduction to sailing and is a key part of the School’s extensive Adventure Education programme.

The annual sail usually involves an overnight stay on Jolie Brise but, due to current Department of Education regulations, the trip was adapted to be just a full day of sailing with pupils remaining in their House ‘bubbles’, supported by a Skipper, First Mate and Bosun, all from the School’s Sailing Staff.

On board, pupils took part in every aspect of sailing a Tall Ship. They also learnt about the incredible history of this world-famous boat.

“It was a great opportunity to take the pupils out to sea and we had fantastic clear day. Few of them had sailed before – and some may never wish to repeat the experience – but the important thing is that everyone had a go and went home with some great memories. Everyone remembers their first trip on Jolie Brise.”

In 2013 Jolie Brise celebrated the centenary anniversary of her construction by the Paumelle yard in Le Havre in 1913. The world famous, gaff-rigged pilot cutter was the last boat to carry the Royal Mail under sail and has won the Fastnet Race three times, including the inaugural race in 1925.

All pupils at Dauntsey’s enjoy a wide variety of sporting and adventurous pursuits and are encouraged to develop a strong spirit of adventure.