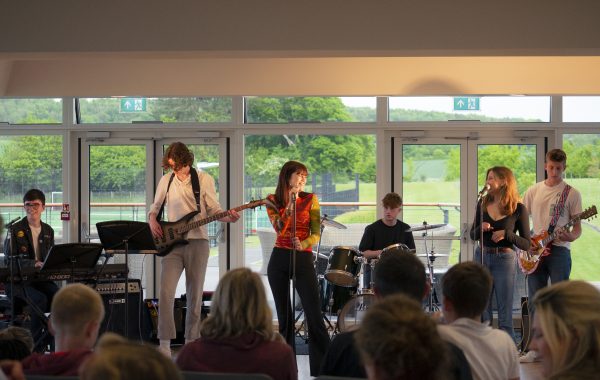 Photograph shows: Pupils at Dauntsey’s take part in Live at the Pav, in aid of MIND

A total of twenty two musical acts took to the stage at Dauntsey’s ‘Live at the Pav’. Pupils from throughout the school selected and rehearsed numbers in their own time and performed to fellow students and members of staff in the school Pavilion. There was a collection at the end of the evening with all donations going towards this year’s nominated school charity, MIND.

Mark Lascelles, Head Master, Dauntsey’s, said:
“It was a superb evening, showcasing the talent in all year groups, and I admire all those who had the courage to stand up and perform. The mixture of year groups, as well as pupils and staff, made it a truly memorable evening. We enjoyed a wide range of musical styles from Elton John’s Rocketman through to Andrea Hozier-Byrne’s Take Me to the Church, not forgetting the stunning performance of Radio Gaga from the staff band!

“It was joyful to hear such talent from up and down the school. My thanks to everyone for making this event such a success.”