Dauntsey’s Pupils Cook up a Feast 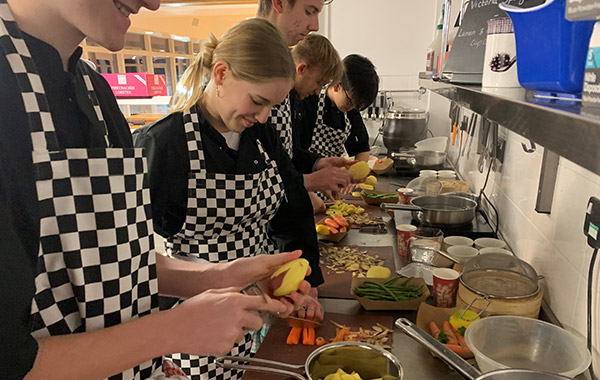 Pupils from Dauntsey’s have been cooking up some delicious treats thanks to several different cookery courses that have been running at the School in conjunction with Vaughan’s Cookery School.

Led by Peter Vaughan, an award-winning chef and a member of the highly respected Royal Academy of Culinary Arts, a course for Years 10 and 11 has included the foundation skills a chef will cover at the beginning of their training.  Professional Kitchen Essentials offers Sixth Formers an internationally recognised qualification which will help them gain employment as hosts in ski chalets, as yacht crew, or as junior chefs in a commercial kitchen.

Eighteen Sixth Form pupils, and one member of staff, have now completed the Level 2 Award in Culinary Skills, validated by the Confederation of Tourism and Hospitality (CTH), which has been taught by professionals from Vaughan’s Cookery School over the past two terms.  The curriculum covered food preparation and good kitchen practice and they all gained a certificate in food hygiene and safety awarded by Royal Society for Public Health (RSPH).

The courses were planned to culminate in pupils running a “pop up” restaurant, hosting a three-course meal for their invited guests and demonstrating their newly acquired skills to parents and teachers.  Unfortunately, in the end these did not take place, owing to the fact that the School closed early this term because of corona virus.

“Learning to cook nutritious and tasty food is an incredibly important life skill and both these courses have provided fantastic training for our pupils as well as offering them the opportunity to find future work whilst studying or travelling.”

Archie, a Sixth Former who has recently completed the Kitchen Essentials course said:

“The course has transformed the way I think about, and prepare food, and I have had great fun learning some really useful skills with Peter and his team. My cooking has improved hugely and I have really enjoyed making some great dishes for myself and my family.”

Peter Vaughan said, “At a time when so much of the food we eat is overly processed, denatured and packaged, it is imperative that young adults learn some kitchen navigation.  On this course, the students control the ingredients and learn how to blend flavours, textures and tastes. By preparing food from scratch, they know exactly what is in their food.  By the end they are equipped to be able to transform basic ingredients into delicious dishes and serve them with pride.”