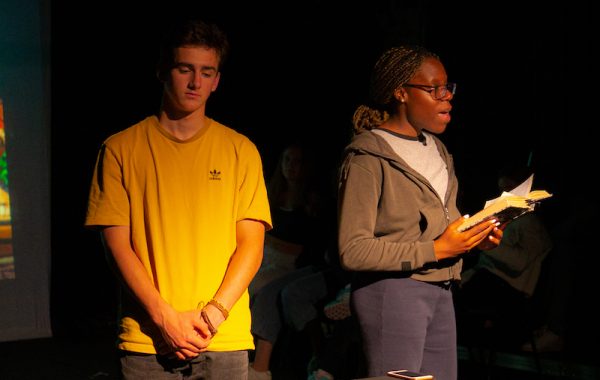 A group of 21 students from the Fourth Form to Upper Sixth at Dauntsey’s have devised and performed a one-act show inspired by the Black Lives Matter movement, entitled Perspective. The show explores racial inequality, primarily within the UK, through scenes, readings and narratives. The process began in 2020, following the death of George Floyd in Minneapolis, USA, when the pupils began to research and educate themselves on the subject matter. The readings used in the show were taken from books or speeches and were chosen by the pupils.

The show focused on a number of themes, including microaggression, the removal of the Coulston statue in Bristol and Black British History. Sets and props were of the bare minimum, projected words and images were used instead, as the focus of the performance was the sentiment, the meaning and the message.

“Congratulations to the students for putting together such a moving and powerful production. Like many others, they were inspired to take some action following the death of George Floyd, and Perspective is the perfect illustration of the way in which drama can form a highly relevant response to real world events.

“The response from the audience was hugely positive: rather than sitting back and relaxing, they were led to think, to consider and to confront the very important issue of racism.”

For further information about Dauntsey’s School and its Drama programme, please go to www.dauntseys.org or follow us on Twitter at Drama at Dauntsey’s@DramatDauntseys