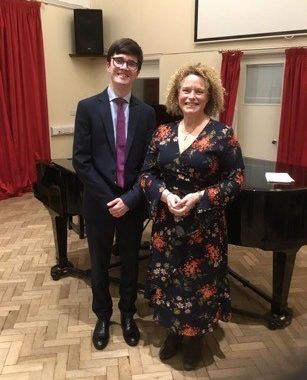 Congratulations go to Sixth Former Rhys, who won the Dauntsey’s 2022 Gilliat Singing Competition, adjudicated by the amazing soprano, Emma Brain-Gabbott. Rhys performed O Del Mio Dolce Ardor by Gluck, followed by Sondheim’s Everybody Says Don’t from Anyone Can Whistle. Emma noted the Gluck required excellent breath control to support the long musical phrases and maintain a beautiful sound. Everybody Says Don’t was a very good choice as a contrasting piece. Rhys delivered the fast lyrics with superb clarity and a great sense of character.

Gareth Harris, Director of Music, Dauntsey’s, said: “The school competitions allow our pupils to take to the stage, share their love of music and experience the challenge of performing in front of leading musicians. All competitors produced outstanding performances, making the selection of winners all the harder.

“We are enormously grateful to Emma for judging each competition with great skill and offering excellent encouragement and advice to all those who took part.”

The award was created by the late Mr Sidney Gilliat (film director, producer and writer), in memory of his wife, Mrs Beryl Gilliat. The competition is open to pupils from Form Four to the Upper Sixth. Mrs Gilliat helped to support many young musicians including some of today’s world-famous pianists. She always took a keen interest in all musical events at Dauntsey’s, as her daughter was a teacher there for many years.