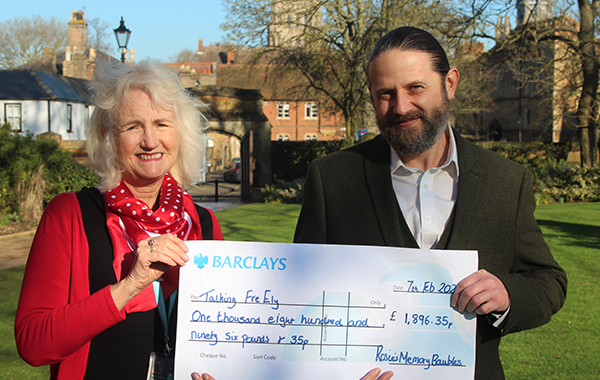 KING’S Ely has raised more than £1,800 for a charity which supports local people who are struggling with their mental health.

The substantial sum was raised through the ‘Memory Baubles Ely’ initiative, which was spearheaded by King’s Ely’s long-serving Head Receptionist, Rosie Holliday, in the run up to Christmas. Rosie launched the initiative to raise funds and awareness for Talking FreELY, a non-profit organisation which encourages open discussion about mental health in the Ely area.

The campaign saw people from across the local area paying a small donation to have the names of their loved ones – be that friends, family members, pets etc – written on festive baubles, which were then hung on the large Christmas tree outside the school’s Old Palace during the festive season.

Anthony Sigrist, founder of Talking FreELY, visited King’s Ely to receive a cheque for £1,896 from Rosie on behalf of the school community. He said: “With mental health struggles estimated to affect one in four adults every single year, the work we do has never been more important. Lots of organisations are encouraging people to have a conversation about mental health but Talking FreELY are taking things a step further by making them happen. We currently rely on public support and are overwhelmed by how much Rosie and King’s Ely have raised for us. Thank you to everyone involved, this will certainly help us to continue Talking FreELY!”

Rosie, who has worked at King’s Ely for 38 years and is also Honorary Secretary to the Old Eleans’ Club, added: “Thank you so much to everyone who supported the Memory Baubles Ely initiative. I originally hoped to raise £1,000 for the charity but to have raised just under £2,000 is fantastic.”

To discover more about Talking FreELY,