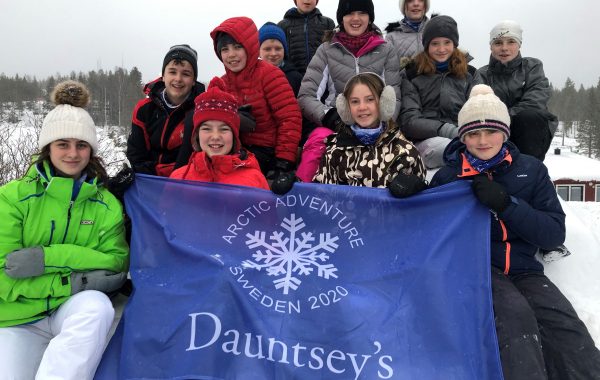 A group of Second Form pupils from Dauntsey’s spent half term in the North of Sweden on an ‘Arctic Adventure’ of a lifetime.

Their base was the city of Skellefteå which was blanketed in thick snow throughout their stay, with temperatures rarely above freezing and as low as -16°C.  The pupils tackled a number of challenges including an alpine luge competition, ice fishing, cross country ski-ing, igloo building, snow shoeing, building campfires and husky sledding.  In between challenges, the pupils perfected their snowballing skills, warming up with an endless supply of hot chocolate.

The group also spent some time in a Swedish school, learning about life as a teenager in Sweden and comparing notes about the differences, and similarities, between their schools.

Throughout the trip, the pupils had to shop for their own food at a local supermarket, transporting it back to their cabin on sledges and then cooking all their meals.

“This exciting trip has become one of the most popular in our adventure education programme.  The students have to look after themselves, their equipment and each other in this demanding Arctic environment.

“We have created an itinerary which includes a mix of challenges in the snow as well as a day at the Boda Borg Centre which is filled with tough quests designed to test the pupils’ both mentally and physically.

“The trip also provides an opportunity to learn about the Swedish way of life and how the locals cope with the arctic conditions in winter.”

One of the pupils added:

“A real highlight of the trip for me was going husky sledding.  We loved giving the huskies cuddles and strokes and they were very friendly!  As soon as we had harnessed them up, we were quickly on our way, travelling at 20 miles an hour, being pulled by eight huskies along a frozen lake.  It was –14 degrees so it was very cold but it was a lot of fun.”

Adventure is an essential part of life at Dauntsey’s; not simply an event but something that teaches invaluable life skills and changes attitudes and behaviour for the better.