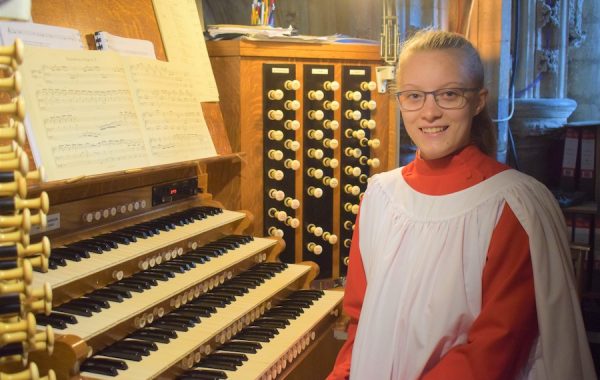 Miriam, 17, says she is “delighted” to have been awarded the diploma, which is something very few organists achieve while still at school.

Miriam, who joined King’s Ely Senior in Year 9 as a member of the Girl Choristers of Ely Cathedral Choir, said: “I am delighted to have been awarded the ARCO diploma. It has certainly been a challenge, but I have enjoyed the opportunity to learn more repertoire, improve my keyboard skills, and study music theory and history.”

Miriam was awarded King’s Ely’s Sixth Form Organ Scholarship in conjunction with Ely Cathedral, and she is currently studying Music, History and Religious Studies at A Level.

Sarah MacDonald, Director of the Girl Choristers of Ely Cathedral Choir, all of whom are students at King’s Ely, said: “We are all so proud of Miriam! She is naturally gifted, but she also puts in an incredible amount of hard work. It’s highly unusual for organists to achieve the ARCO diploma while still at school. The RCO diplomas are the world’s most coveted and prestigious qualifications for organists, so this is very exciting indeed.”

The next step up from the ARCO diploma is the Fellowship (FRCO) diploma, widely recognised internationally as the most rigorous and respected qualification that organists can achieve. Miriam hopes to secure her FRCO diploma during her gap year after King’s Ely Sixth Form, when she will be the Organ Scholar at Tewkesbury Abbey and Dean Close School, Cheltenham.

To discover more about opportunities at King’s Ely, including choristerships and scholarships, please visit: www.kingsely.org