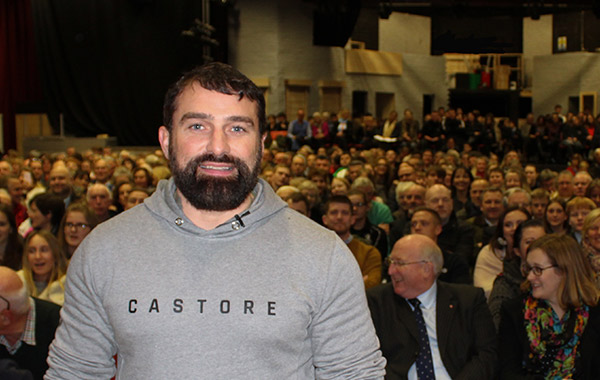 Dauntsey’s has recently welcomed the adventurer, TV presenter and former soldier, Ant Middleton, as part of the School’s Mercers’ Lecture series.  Ant presented his lecture to a sell-out audience of some 950 pupils, staff and members of the local community, talking about his journey from life in the British military through to his role today as an inspirational survival expert.

Ant built his lecture around four ‘columns’ to visualise the route to become a stronger person.  One of these columns represented integrity.  Ant explained that you have to be true to yourself to achieve success and shared his experiences to reinforce this lesson.  He spoke candidly about some of the failures in his life, explaining that he accepts his previous mistakes but lives ‘in the moment’, there being no such thing as ‘the past’.

Ant also talked about his adventures climbing Mount Everest and re-enacting Captain William Bligh’s journey as the captain in Mutiny on the Bounty.

Before the lecture, Ant ate dinner with a group of Sixth Formers.  They had the opportunity to ask him a range of questions which covered his experience on set filming, his upbringing and how it influenced the man he has become.  Fear was a common theme, particularly when talking about his time in the military.  Ant spoke about different ‘bubbles’ of fear, suggesting that we should take control of our fears to become stronger both mentally and physically.

Tegan, a Lower Sixth student from Dauntsey’s, who attended the lecture said:

“Ant inspired the audience with his powerful mindset and the way in which he maintains a positive attitude, no matter what the situation might be.  He certainly inspired the younger audience to want to achieve their goals but also to realise that it’s possible to take different opportunities as you work towards these goals.

“He showed that anything is possible with a strong mindset and we would like to thank him for such an inspirational and entertaining evening.”

All lectures commence at 7.30pm and will be held in the Memorial Hall.

Everyone is welcome to the Lectures and entry is free but tickets must be reserved.  Please note that bookings for lectures will open approximately one month before the date of each lecture.