Home / Boarding at an independent school / The importance of creativity

The importance of creativity

by Victoria Rose, Director of Art at Dauntsey’s 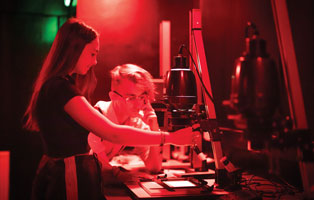 The arts are often considered the poor relation to STEM (Science, Technology, Engineering and Maths) subjects, which are seen as vital skills in a modern economy. Indeed, some people regard the arts as a soft option. However, there is now a growing recognition of a critical need for creative thinking and visual skills within the STEM mix, and a new acronym STEAM (Science, Technology Engineering, Arts and Maths) is now preferred by educationalists.

This development is exciting and has great potential to attract a whole new cohort of pupils who might otherwise disengage from STEM subjects. Once art and design technology is blended in with the traditional STEM subjects, a more imaginative and innovative picture emerges.

STEAM has already gathered significant momentum in the US, spearheaded by academics and students at the Rhode Island School of Design (RISD), who developed a curriculum which brought together the five STEAM subjects. Their goal was to educate the world of academia about the importance of incorporating creative thinking and visual learning into the classroom.

This is not a new concept – think of the Renaissance artist Leonardo da Vinci, who was a master not only of art but also scientific invention. Or more recently, the Industrial Revolution in Great Britain when art, science and engineering were close and successful companions.

The Design Council argues that good design capability can boost the UK’s competitiveness and certainly the UK has a world-class reputation for art and design, going back centuries. But how many people have heard of British designer Sir Jonathan Ive? He was Chief Design Officer of Apple and he designed the iPhone, iPad and MacBook. Without his design genius, Apple would essentially be an engineering company. Creativity is the magic ingredient that turned Apple into the multi-billion dollar business that it is today. Giants like Tesler, Apple and Google frequently recruit individuals who have a creative rather than technical background. They are hired for their design talent, innovation and problem-solving skills.

Creativity and imagination can set you apart in a world where technology and Artificial Intelligence (AI) are taking over many roles. Indeed, few jobs in the creative industries are at risk of automation. The iterative process involved in studying creative subjects leads pupils to constantly question their work and want to improve or add and try new approaches; a valuable skill in the workplace – and in life.

Creativity is sought after

A report published in 2019 by the Durham Commission on Creativity and Education agreed that creativity is the driver of economic growth and innovation, stating that our national economy has been boosted by the success of the creative industries in the past ten years. Such success will only increase, the report continues, as long as we can ensure that young people are given the opportunity to experience and develop skills in art, drama, music, design, craft and digital awareness – the foundation of the creative industries. The report concludes that creativity is now one of the most sought after clusters of skills for all employers.

Encouraging young people from as early an age as possible to engage in art and design and value these subjects as much as maths and other subjects, is a critical first step in establishing a STEAM culture in the UK. In doing so we will develop in them the skills of problem-solving, independent thinking, planning, development, organisation, communication and presentation.

Many schools understand the opportunity offered by these subjects but there needs to be a greater investment in creativity in all schools, in all parts of the country. In one of the most watched TED talks of all time the late educationalist Sir Ken Robinson argued that creativity is as important as literacy and should be given equal status. He defined creativity as ‘the process of having original ideas that have value’.

No longer should art A level be seen as an easy option. Creative subjects encourage students to take thoughtful risks, engage in experiential learning, persist in problem-solving, embrace collaboration and work through the creative process in order to produce innovative results. These are skills for the world of work beyond the classroom and further education. These are skills for life.