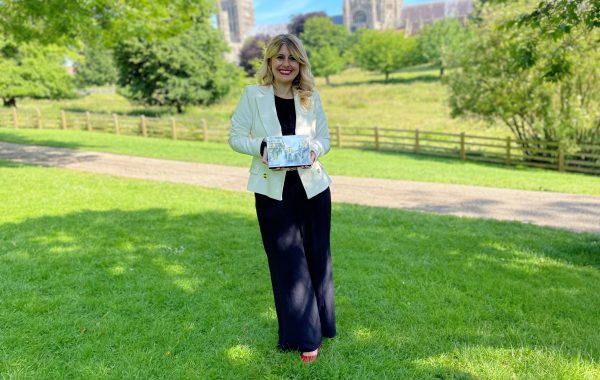 A teacher at King’s Ely has been crowned a winner in this year’s Pearson National Teaching Awards.

Esmeralda Salgado, who is Head of Modern Foreign Languages (MFL) at King’s Ely, has won Silver in the prestigious award scheme’s ‘Teacher of the Year in a Secondary School’ category.

Esmeralda, who joined King’s Ely in 2009 and has been teaching languages for 20 years, is one of 80 Silver Pearson National Teaching Award winners in the UK. Esmeralda is now in the running to win a gold award later in the year. Recognition of this once in a lifetime achievement will be broadcast on the BBC’s ‘The One Show’ as part of a week-long celebration of teaching, which sees famous faces honouring award winners every night in the run up to the ceremony.

Esmeralda, who was presented with her silver award at Ely Cathedral during King’s Ely Senior’s Prizegiving Service on May 27th, said: “As an MFL Teacher, I am truly honoured and humbled to receive this award, which is not only national recognition of my work, my MFL Department’s work and my school, King’s Ely’s work, but most importantly, recognition of the hard work, enthusiasm and dedication of all MFL Teachers in the country! I am extremely grateful to the Pearson National Teaching Awards team for giving me this incredible opportunity to celebrate outstanding teaching and learning throughout the UK.”

Esmeralda, who was born and raised in Albacete, Spain, has taught languages to students from Key Stage 2 through to Key Stage 5. She is an Advanced Skills Teacher and alongside her role as Head of MFL, has been King’s Ely’s Digital Lead for two years. Esmeralda was instrumental in helping her colleagues develop their online teaching skills when the pandemic struck in 2020. In the classroom, Esmeralda implements informed evidence practice in everyday lessons to foster confident, fluent, independent and creative learners, who have a strong growth mindset. Her goal is the driving force behind the King’s Ely MFL Department, and it is at the core of the Teaching and Learning Steering Group at King’s Ely, to which she belongs. Her approach to teaching informs the school’s Digital Learning Strategy and Languages Curriculum. It is underpinned by Rosenshine’s principles of instruction and research on second language acquisition.

In her current position and in her previous role as an Advanced Skills Teacher in the Medway Learning Authority, Esmeralda has supported and coached colleagues within MFL and other curriculum areas, especially NQTs and struggling teachers in Medway schools. She helped them develop their own teaching and learning strategies and boost their confidence, and as a result, that of their pupils.

Esmeralda also has a blog – https://mflcraft.blogspot.com/ – which has been viewed 172,000 times and has become a go-to platform for members of the MFL community, not just in the UK, but across the globe. Esmeralda regularly speaks at national language events and conferences, and she hosts webinars on different aspects of teaching and MFL.

Jane Thomas, Vice Principal Academic at King’s Ely, said: “Esmeralda is one of the most talented, committed and positive teachers I have ever worked with. She is an amazing problem solver and has a ‘can do’ attitude to everything; this was brought home to me more than ever when during the January-March lockdown last year she took on the teaching load of a colleague who was off with long Covid, meaning that at times she was teaching classes of 50 + pupils and ensuring they continued to receive quality feedback on all their work. Alongside this she also mentored members of her team who were at short notice teaching courses unfamiliar to them.”

Education Secretary Nadhim Zahawi said: “Congratulations to Esmeralda Salgado on this incredible achievement, and for the hard work and dedication which led up to it. Winning this award is impressive, well-deserved and shows Esmeralda’s commitment to helping students achieve their full potential.”

The Pearson National Teaching Awards are open to every school across the UK. The awards were established by Lord Puttnam CBE in 1998 and are managed by the Teaching Awards Trust, an independent charity. The vision of the charity is to recognise and celebrate excellence in education. For more information, visit: www.teachingawards.com