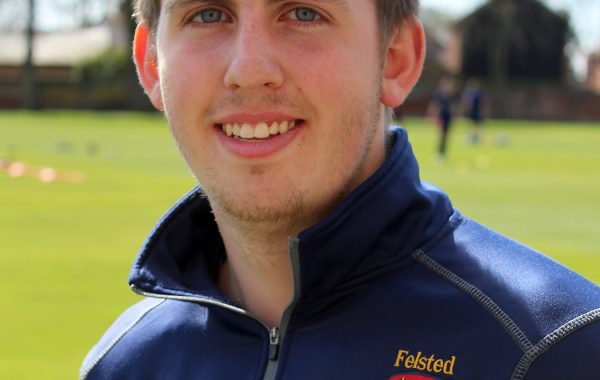 Felsted’s Ben Waring, age 18, from Hertfordshire has been named the Wisden Schoolboy Cricketer of the Year, an honour based on his outstanding performance in school cricket. He received his award at Lords’s Cricket Ground last night from England Cricketer Jonny Bairstow.

Ben not only plays for Felsted School 1st XI, and Saffron Walden CC 1st XI in the East Anglia Premier League, but also holds a contract with the Essex Cricket Academy where he attends training camps. He has recently toured Dubai with Essex and Australia with Felsted, but his most memorable current highlight has been the opportunity to bowl against Alastair Cook during Essex training, but he has yet to get him out!

Talking about this achievement, Ben, a weekly boarder at Felsted, comments “When I heard the news I was shocked and delighted. After all the hard work that has gone into the last few years, I am incredibly proud to receive this honour.”

Felsted’s Director of Cricket, former England cricketer Jason Gallian, is delighted that Ben has received this accolade; “the future looks very bright for Ben if you look at what previous winners have gone on to achieve.” Previous winners include current England stars Joss Buttler and Jonny Bairstow, as well as James Taylor, who has sadly had to retire after discovering that he had a congenital heart condition.

Felsted’s Headmaster, Mr Chris Townsend, who won three Blues for cricket while at Oxford University, is delighted that Felsted is continuing to foster young cricketing talent. “Felsted provides an outstanding environment for sportsmen and women to develop their potential alongside their studies. It is an incredible testament to the School and to Jason Gallian that a Felsted pupil has not only won this award, but that Reece Hussain, another Felsted pupil and nephew of former England Captain Nasser Hussain, was a nominee. Reece, who left Felsted last summer, scored over 1,000 runs in his last schoolboy season, including only the third double century in Felsted’s history.  Even England opener Nick Knight did not manage that!”

Felsted has a formidable reputation for cricket both locally, regionally and nationally. Pupils begin to play cricket from Year 3 (age 8) and it is the main sport for boys in the Summer Term in both the Senior and the Preparatory School. Several Old Felstedians have gone on to become professionals for the County and England teams, including Derek Pringle, John Stephenson, Nick Knight and Tim Phillips. Cricket for girls became a main sports option in 2014, with two teams competing at local and regional level.  The Felsted Girls’ U15 Team recently won the U15 Lady Taverner’s Essex Cup 2016 and are through to the Regional Finals, under the expert tuition of Carla Rudd, professional county cricketer (Sussex) and Felsted girls’ cricket coach.

Felsted School has been declared one of the Top 100 schools for Cricket by The Cricketer Magazine 2015 and is currently nominated as an Inspirational School for girls’ cricket by Essex CCC.  Felsted became a MCCF (Marylebone Cricket Club Foundation) hub for girls’ cricket in November 2015, and is the main school partner of Essex Cricket, with many boys and girls playing at county level.