Life at a state boarding school 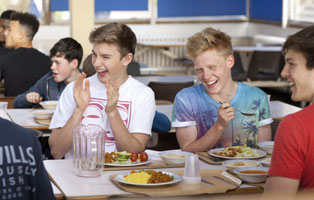 State boarding schools come in all shapes and sizes, from non-selective schools in rural settings to grammar schools in towns and small cities. A few are single-sex while others are co-educational.  Several are very ancient – Lancaster Royal Grammar School (LRGS) traces its roots back to the thirteenth century – while others have been established recently to meet demand in this vibrant sector.

All state boarding schools are united by a shared belief in the opportunities of boarding. There is a consistent concern for the wellbeing and personal development of the young people in our schools.  Wraparound pastoral care creates a very special environment where friendships and shared activities become for many the defining privilege of their teenage years.

Extra-curricular opportunities are a particular strength. After-school activities flourish in a residential community with no commuting required. Many pupils play competitive sport against independent schools, some schools offer outstanding debating and music while others, including LRGS, place a high value on thriving CCF Army, Naval and RAF sections as a mainstay of their outdoor and leadership programmes.

Academic results are a major factor for most parents in choosing a state boarding school, and here too the sector punches above its weight. ‘Value-added’ analysis shows that our boarders tend to do even better than day pupils at GCSE, as a result of the support and encouragement they receive from boarding staff who engage with boarders’ academic challenges during and outside prep times.

At LRGS, two-thirds of our 170 boarders live within an hour of the school, but growing numbers are from London and elsewhere in the UK. We have about 30 overseas students, who must have EU passports or right of UK residence. Bilingual or expat families from Europe and the Middle East and boarders from Hong Kong and West Africa are all well represented.

Most of our families are ‘first generation’ boarders. They may not initially have considered boarding or even been aware that exceptional state schools offer this opportunity. Boarding fits modern life for many families living with the realities of commuting, travel commitments, divided families or older siblings away at university. A mother bringing up her son on her own told me how boarding allows her to manage her growing business, while her son benefits from positive role models and support. ‘We have the best weekends ever!’ said the mother of another weekly boarder.

The boarding experience changes with age. Our younger boarders are in light and airy shared dorms of four to six. The emphasis is on establishing excellent habits both in boarding and in the classroom. Pastoral care is led by the housemaster and the matrons – whose days include reuniting pupils with lost property and supplying toast! Evening tutors supervise prep, with young sports grads and sixth-form mentors often on hand. Plenty of summer evenings are spent chasing either a ball or each other round the fields. Junior boarding has the excitement of a secret society: boarders and day pupils are indistinguishable in school, but boarders have the key to an extra world – while many day pupils head for a long journey home.

In the GCSE years, boarders normally share a dorm with one other pupil, and in the sixth form all boarders are in single rooms. Revision season sees pupils working together – but with occasional encouragement to head out for an impromptu barbecue or game of dodgeball to relieve the pressure.

Parents increasingly see sixth-form boarding as an excellent stepping stone to university. We encourage all our senior boarders to take on leadership positions and to engage with the local community – from planting trees to hosting our local residents’ Christmas party.

State boarding is very much a shared enterprise between parents and school, and open communication with parents is the aspect that has changed most in recent years. ‘I Skype my dad twice a day,’ one overseas boarder told me recently – although most teenagers struggle to communicate quite so frequently!

You can tell a certain amount from a school’s website and reputation, but it is important to visit and meet staff and students if you can – at open days, for a tour on a normal school day, and perhaps for an evening taster session. Come and see what makes us special.