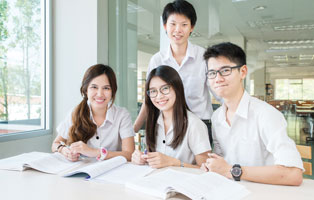 About 10% of BSA members are located outside the UK and provide a British international curriculum, leading to IGCSE and IB or A levels. These schools provide further choices for families living outside the UK as well as for families who, for a variety of reasons, want a more international environment while staying close to mainstream British education and protecting their options of attending UK universities.

International boarding schools – a mainstream British education overseas… Many of these schools are in Europe – particularly in Switzerland – and these will perhaps be the ones most likely to interest parents and pupils resident in the UK who want a more international flavour to their educational experience. Even though most British boarding schools have international pupils, these are generally in the minority whereas this is less likely to be the case in overseas schools.

There are many international boarding schools in Switzerland because of:

The traditional neutrality of Switzerland also encouraged certain idealists to locate schools there, for example St George’s at Montreux. St George’s Oxford-educated lady founders hoped  their pupils would as adults ‘understand others better and thus contribute to the promotion of peace in the world’.

Many of the schools in Switzerland have a stunningly located campus close to lakes and surrounded by mountains. Few, if any, schools in the UK can match the scenic location of Aiglon College or, indeed, most of the other Swiss schools. However, Switzerland is an expensive country and the boarding fees in these schools are on average 35% more than those in their UK counterparts.

In contrast, boarding school fees in some other European countries such as Spain are often considerably lower than in Britain. This can be an attractive factor affecting parental choice even after transport costs have been taken into account. With carefully chosen budget airline flights, transport costs may not be significantly greater than a 200-mile round journey between home and school in the UK. In some cases parents may own already or plan to acquire a holiday home close to the European school.

A wish to move from IGCSE to International Baccalaureate (IB), rather than A levels, may stimulate interest in a move outside the UK. Although there are several IB schools in the UK and some of the international schools offer A levels, the reverse situation is the norm so there is a wider choice of IB schools in continental Europe.

Specialist facilities may be another reason for looking at boarding outside the UK. A talented skier is more likely to have opportunities to maximise their talents in alpine Switzerland than in England. Pupils gifted in tennis and golf may find the climate and facilities in southern Spain more helpful. A budding test cricketer, however, should definitely opt to stay in the UK! Several international schools are close to cultural centres and can offer particularly rich opportunities in music and art – for example, St Gilgen International is situated in a village very close to Salzburg.

Schools outside Europe are generally less likely to attract boarders resident in the UK and more likely to provide alternatives to very long distance boarding for expatriates living in the geographical region – there are BSA members in Nigeria and Nepal. Some well-known UK schools have boarding campuses in the Far East, such as Harrow in Hong Kong and North London Collegiate in Jeju, Korea. In both cases, despite the single-sex nature of the mother schools, their Asian offshoots are co-educational.

Parents and pupils considering British international boarding schools overseas, whether in Europe or further afield, should look for the same high standards of teaching, learning and pastoral care they would expect in the UK. This means a school’s accreditation is important and the safest ‘kitemarks’ parents should look for are membership of BSA and/or membership of COBIS (the Council of British International Schools). It also gives considerable assurance if the school opts for regular inspections from ISI, the Independent Schools Inspectorate, which, in addition to its responsibility to the Government for inspecting independent schools in England and Wales, inspects British international schools worldwide, including those seeking approval under the Department for Education scheme for British Schools Overseas. Parents should read the relevant ISI reports carefully whether they are searching for a school in the UK or for a British education overseas.

I am an IB student from Kazakhstan studying and boarding at St George’s International School in Switzerland. Our school is very beautiful, situated on the Swiss Riviera, surrounded by sky-scraping mountains and a majestic view which I see every day from my window. Most importantly, it is an international school, home to students from more than 70 countries. The teachers give their time and effort so students can achieve their best academically. The houseparents create a caring and loving atmosphere in the boarding house. My friends have become like family and I call St George’s my ‘second home’. It is a place where foreign language or a different culture is never an obstacle. Our school motto, Levavi oculos, means ‘To lift your eyes’. It is a call to be open to new experiences and to be aware of the world in which we live. This message is promoted throughout the whole school and through different educational field trips and cultural outings.

Before coming to St George’s International School I had never lived alone outside of the Russian territory and I was unsure about the challenge of studying abroad. But on the first day at school I met the houseparents and the other boarders just like me – my second family – and they helped me to get settled instantly. Now after three years here, I am just about to complete my IB Diploma and will be graduating. The learning process and all the various excursions and trips have enriched my experience. Life at St George’s is full of opportunities, so every student feels free to try their hand at something new or continue to develop their existing skills. In my case, the school courts have allowed me to keep playing tennis. If you are artistic you are equally able to develop your talents through school productions, music concerts and dance lessons. St George’s helps us to know what we want to achieve and how we will do it.